I regret this list does not include Japanese one, although Japanese society is so closely related to problems with pedophilia as the other countries in the list. It is commonly said that pedophilia is much more common in Japan since law in Japan was uneager to ban child pornography for a long while. However, the recent pedophile social theories attribute the apparent generosity with pedophilia to lolisocial (lolicon-social, the lolicon version of homosocial, characterized by the patriachal attitude toward female youthfulness, and pedophilophobia) to find out it is a hidden menace to pedophiles.

So I would like to take initiative to promote the P-Pride (Pedophile Pride) movement from Japan, proposing the P-Pride flag. 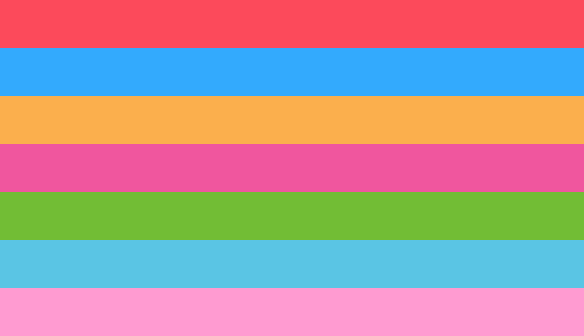 The sequence of colors in this flag derives from Ichigo Mashimaro (苺ましまろ), a Japanese manga by Barasi (ばらスィー), who is the most meritorious pedophile in Japan. The serialization of Ichigo Mashimaro began in 2002 and has already published seven volumes so far. Each volume has a unique color in the Ichigo Mashimaro title logo, like volume 1 red, volume 2 azure and so on. I arranged these seven colors in publication order and designed "P-Rainbow". This flag is licensed under CC0 and you are completely free to use this flag for your actions any day now. I sincerely hope 2017 will be a year of P-Pride.